The Skilsaw company was established in 1924 and gave us the worlds first portable circular saw. In 1937 Skilsaw released the extremely popular Model 77 which is still in use around the world today. There tends to be a little confusion between the brands Skilsaw and Skil. Let me take a second to clear this up. Skilsaw is a company that creates tools for the professional end user whereas Skil is focused on the consumer DIY market. There is a distinct difference in quality between the two brands. Curious? Read on to see all the details in the Skilsaw Super Sawsquatch Circular Saw Review. The Skilsaw Super Sawsquatch is by far the largest circular saw I have ever seen. Why would anyone need something this big? Well, if you have ever tried to cut a 6″ x 6″ beam you will know that it is challenging task to say the least. If you are just trying to demo beams of this size, you can use a chainsaw, but if you want to actually work with a timber of this size, you need something more precise.

The Skilsaw Super Sawsquatch is one of only two circular saws with a 16-5/16″ blade that I know of. We are going to take a look at this saw’s features, performance, and value to see if this is something that you might want to add to your tool inventory.

Let’s start off with the most obvious feature, the massive 16-5/16″ 32 tooth blade. This blade allows the circular saw to cut to an impressive maximum depth of 6-1/4 inches. The Supersaw Squatch has a 1″ round arbor to support this monster blade.

This unit is driven by a 15 Amp worm drive dual field motor meant to keep the saw running at a cooler temperature and is corded. There is a port to change out the gear oil when necessary and quick external access to the brushes. The foot, gear housing, and motor housing are all made out of magnesium which keeps this beast as light as possible. The whole unit itself weighs in at just over 27 pounds.  So, this is a bit heavy as you would expect.

With a blade, this size, stopping it quickly is a concern. Because of this, Skilsaw has included an electronic brake.

The blade on the Skilsaw Super Sawsquatch is located on left side and will bevel an impressive 45 degrees. To control the dust created by this saw, there is a dust port at the front of the saw where you can adjust the direction of the extracted dust. The depth of cut can easily be adjusted by a flip of the lever located at the back of the saw. There is a blade changing tool that is stored right on the tool for your convenience. The last thing to mention about this unit is the carrying case. This is usually an afterthought with tools but in this case, with the massive size and weight, Skilsaw wanted to keep this to a minimum. The Super Sawsquatch sits on a base that clips to the saw foot and you use the handles on the saw to carry it. This way, the saw is easy to move, sits flat and the blade guard is protected. This case is really ingenious.

I can sum this section up with one word: Outstanding.

I had a very old 6″ x 8″ barn beam (slow growth Elm I believe) that I had bought over the winter to replace a mantle. The beam wasn’t going to work out for what I bought it for, so this was a perfect opportunity to check out what this saw could do.

Before I go any further, this saw blade rotates at 2,500 no load RPM which is much slower than the typical 5,300 no load RPM found on 7-1/4″ circular saws. Even though the center of the blade is turning slower, the large blade size creates a high blade tip speed.

My first cuts were to see how well the saw performed crosscuts. This is the type of cut this saw is going to be used for most of the time. Even with the huge size of this saw, it was extremely easy to use and control. I have to say, its a bit intimidating to stand behind this saw and pull the trigger for the first time, but it is a lot less hard to handle than I would have thought. The saw seemed to handle this task with little effort at all.

The next type of cut I performed with this saw was going to test power and ability to take some abuse. I had originally wanted to hollow out this beam to cover an existing concrete mantle. This task proved to be a huge waste of time with the tools I had prior to this saw. I had made quite a mess of the beam and I wanted to see if this saw would have made a difference had I possessed it earlier.

I attached the Kreg Rip-Cut guide I had gotten this past winter and to my surprise, the Kreg saw plate fit this Super Sawsquatch foot just fine.

Using the Kreg Rip-Cut setup, I cut lengthwise strips into the beam 6 inches deep for the full 6 feet. I performed this cut 6 consecutive times and didn’t give the saw very much time to cool down between cuts. Just long enough for me to get a breather.

This cut really showed me what the saw is all about. Because this wood is so dense and the depth of the cut is so deep, this cutting task took a lot longer than the crosscut. I could hear the worm drive motor slowing down during this cut, but it kept chugging along.

At the end of the last cut, I put my hand on the motor and the cord of the Skil Super Sawsquatch and they were both hot but everything appeared to be fine. This is a 15 Amp saw and even though this saw was pushed really hard, no breakers were tripped and saw was still ready for more cutting.

One last thing to mention is the dust port. As you can imagine, this saw creates a lot of dust. Being able to adjust the direction the saw ejects the dust is nice. There is still quite a bit of dust that does not make it to the port and is just flying around in the air, but that was no real surprise. The dust port did get plugged up during the rip cuts, but that is due more to the type of long wood stands being produced rather than fine dust from cross cuts. All in all, the dust port worked fine.

Now that we know the saw performs at a very high level, we still have to ask if this is a good value. To answer that, we have to acknowledge that this saw is made for the professional. The Skilsaw Super Sawsquatch, Model #SPT70V-11 retails for $549 on Amazon.

Another good indicator of the value of this saw is when it is put in the hands of a pro and you get the opportunity to see their reaction. Prior to me ever testing this unit, it got loaned out to a contractor who needed this saw for a particular task. After the job got done, he asked if he could buy the saw from me without even asking for a price. I declined his request but was quite pleased by the reaction to the saw’s performance.

As you can probably tell by now, I am a huge fan of the Skilsaw Super Sawsquatch. Skilsaw has a very long history of making incredible saws. This is just another impressive offering by what I consider to be the circular saw leaders.

There is almost nothing this saw can’t handle. You won’t be using this saw for your day-to-day 2 x 4 cuts, but when you have a job that requires big cuts, the Skilsaw Super Sawsquatch might be the only tool that can get the job done. When that day comes and if you are a pro, this tool might be able to pay for itself the first time you use it. 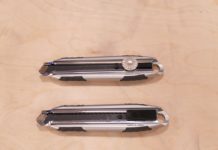