There is nothing like the sound of a hammer drill working hard.  Well okay maybe the sound of a slap shot or a nice hit on the boards, especially when it is a Red Wing player getting hit by a Blackhawks player.  It still amazes me how a small motor can deliver so much power and do so much work.  What is even more amazing is the Bosch hammer drill that delivers 700 in-lbs of torque and it is only an 18V. Take a look around at any job site and you will see a Bosch tool hard at work.  If you don’t see a Bosch hard at work, try finding a real job site.  If you look closer at the tools you will see they have been used and abused.  A lot of bigger job sites buy their own tools for that job.  These tools are used by people who don’t own them, so they don’t care as much about the tools.  It is kind of like when you rent a car.  You do brake torques, you jump them over rivers and play smash up derby, after all isn’t that why you pay the extra $7 for the insurance agreement.  Well enough talking about what I did last weekend in the rental car, let’s talk about the Bosch Brute Tough Hammer Drill which is an 18V Lithium-ion drill.

The first thing you might notice is the chuck.  It is bright and stands out.  That is because it is a single sleeve aluminum ratcheting chuck, which gives this tool a pretty good balance.  The hammer drill is not front heavy and actually has a nice feel to it.  The chuck is a little shorter than some other drills on the market and this drill is only around 8″ long which makes it easier to get into tight spots.  Another feature Bosch implemented into this drill is an ergonomic soft grip.  The handle of this drill has a nice feel and design which makes it ideal to work with gloves or no gloves. As with most drills, the internals are covered by a plastic body.  Bosch uses an ABS /nylon composite which is more flexible than other types of plastic.  This is ideal as it will flex when dropped and prevent cracks, plus it absorbs some of the impact and helps protect the internal parts.

Inside the hammer drill, there is a 4 pole motor that produces 700 in-lbs of torque which is very impressive.  The motor turns the chuck at 0-420 and 0-1,800 rpm which is controlled by a variable speed trigger.  There are 25+1 clutch settings to match the power to the application.

We ended up using this hammer drill a lot on a local house we were working on.  One place we used it a lot was the basement.  We are finishing the basement and had to set some anchors plus drill through some concrete to run pipe.  Would the Bosch Rotary Hammer be easier?   Sure, but we wanted to run this tool and give it a challenge.  After all when we were fastening down the sub floor with this drill, we were pretty sure we heard the drill laugh at us, well at least giggle.  Time and time again the drill did what it was supposed to, work and keep up with the user.  Well what else is there really to say about this hammer drill except it is a workhorse. 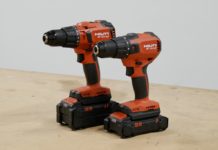