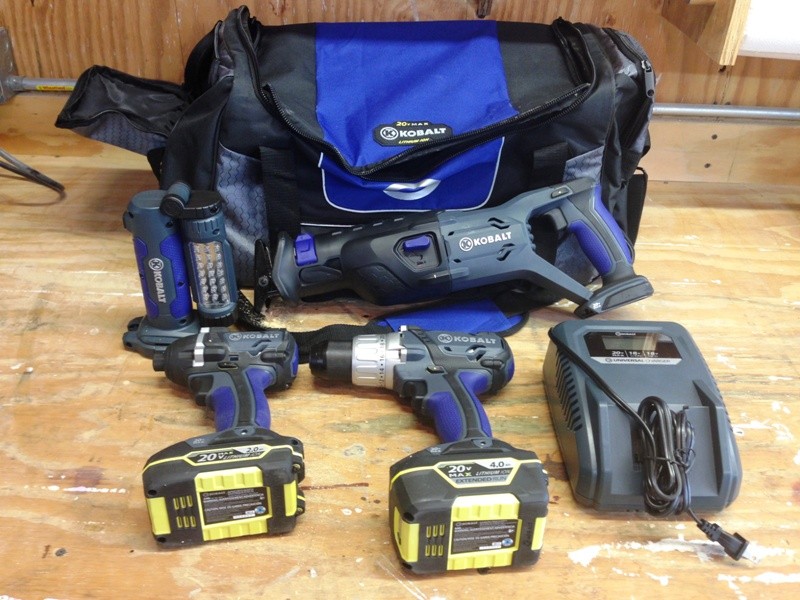 I have to say I am a little torn with this review and the Kobalt tools.  I can't say I use Kobalt tools a lot, but I do like them.  When I first found out Kobalt had 20V tools, I was excited to see what they did and what's new with them.  After looking more into the tools, I found out that not a lot was changed.  There was no brushless motor or any noticeable overhauls. While some of the specs of the tools increased, for the most part they are the same.  Now with that said, does it really matter?  Kobalt isn't trying to compete with brands like Dewalt, Hilti or Bosch.  Kobalt is trying to go after the homeowners and maybe one man contractors.  So does a brushless motor really matter?  Most homeowners won't be using their tools 8 hours a day for 5 days a week.  So with that said, I can't be all that disappointed as these tools are still a great option for the homeowner.  In fact, if you check out Lowe's site and look at the 18V version, they get high praises for people who use these tools and that is what is most important.  Kobalt did make one important upgrade and that was a 4 A/h and 2 A/h battery.  So let's check out this kit.

This is a four piece combo kit, model K20-LC4000A.  The kit comes with a drill, impact driver, reciprocating saw, flashlight, charger, 1- 4 A/h battery, 1-2 A/h battery, a bit, reciprocating saw blade and a carrying bag.  One thing to note is I love that the kit comes with a larger and small battery.  It allows the user to match the battery with their work.  If I am only doing a little bit of work and don't need the longer run time, I can use the 2 A/h battery.  One thing to note is it would be nice if Kobalt had a kit that included a circular saw. So let's take a look at each one. The drill is a little heavier than I expected.  It has all the bells and whistles of other drills such as clutch settings and 2 speed gear box. Compared to the 18V drill, it has the same RPM of 0-450, 0-1,600 RPM.  The torque has increased from 455 in-lbs to 485 in-lbs., not a huge jump.  The variable speed trigger is easy to control.  All in all this is a powerful drill that can do some serious work for the homeowner. Having a reciprocating saw is nice, but I would like to see a kit with a circular saw as I think that would get used more.  I checked around but I don't see that Kobalt offers the 20V circular as of today.  As far as power and options, this is a nice saw.  It has a variable speed trigger and adjustable shoe.  There is also a switch on the side to switch it for orbital for more aggressive cutting.   The tool has a tool-less blade change system with a 1-1/8″ stroke length.  The strokes per minute are 0-3100.  For a reciprocating saw, this has good power and good balance for the homeowner. The kit also comes with a work light.  The light is actually pretty cool.  It has a 24 LED array with 180° pivoting neck and 270° rotating head.  I can't say it's the brightest light you have ever seen, but it does a great job lighting up dark areas.  With the range of movement, it is a nice light.

Personally if you already own the 18V, I would stay put.  There is not enough of a jump with the 20V to justify the upgrade.  Plus, currently the line is rather small.  If you are new to Kobalt and looking for a combo kit, the 20V is a nice option over the 18V.  Now remember the 20V is pretty much the same as an 18V in regards to volts, it's more of a marketing idea like how Dewalt jumped to a 20V.  But considering you get the upgraded 4 A/h and 2 A/h battery, it is always nice having the longer run times.

Overall I do really like this kit and think it's a great buy for the homeowner. With a 5 year hassle free warranty, it's hard to beat.  While the drill is a little on the heavy side, the impact is great.  The reciprocating saw will pretty much meet any demand of the homeowners.  For the price of this combo kit, it's pretty hard to beat.