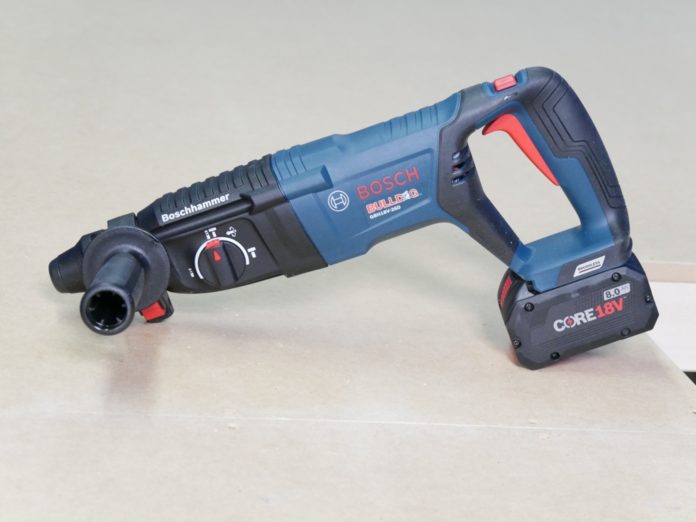 Bosch is known in the industry as one of the leaders in the concrete arena.  They are designed for professionals who rely on the tools day in and day out.  Back in the day when I was in construction, I used Bosch.  I remember after the flood in Chicago, we had to rip out so much concrete and other materials from the old railway system and the basement of Marshall Fields.  What stood out to me was how much abuse I put the tools through and they always performed.  So speaking of performance, let’s check out the Bosch Cordless BullDog Review.

The Bulldog series is the flagship for Bosch.  This is a series that is well known around the industry for tradesmen in demolition, plumbing, electrical and more.  If you need to drill a hole into concrete, most likely the tradesman has a Bosch Bulldog.

What is new for Bosch, is the GBH18V-26D.  It’s an 18V cordless 1″ solution that is designed to work with the Bosch Core batteries to deliver the best performance in the industry.

Before I get into the review, I want to touch on Bosch Core battery.  The Bosch battery uses the 21700 cells which is lighter and can harness more power.  Tie that in with the design of the CoolPack and it’s one awesome system. One of the best features of this tool, well besides power, is the kickback control.  So if you hit rebar or something that causes the tool to spin, it will automatically shut down the tool saving your arm, elbow, shoulder and the tool from damage.

The rotary hammer is powered by the Bosch 18V Core battery.  You can use the 4Ah battery but you can increase the run time with the 8Ah battery. 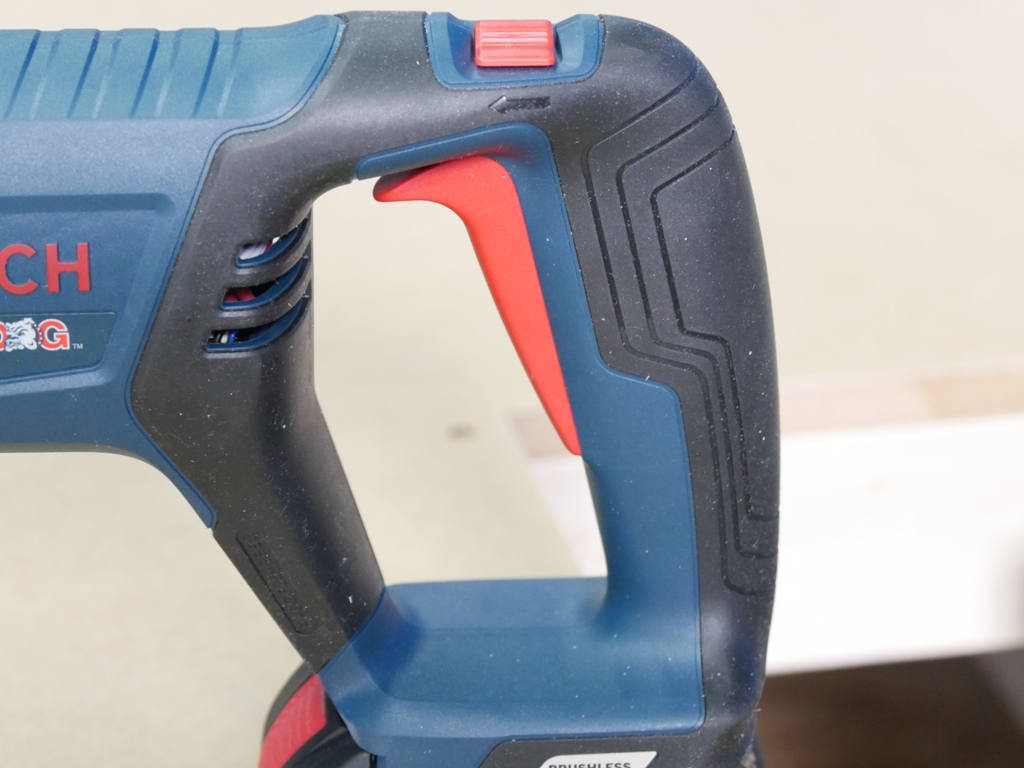 The tool is designed with the same D-Handle you see in the corded version.  The D-Handle is great for overhead, horizontal and downward drilling. On top of the handle, you can change direction from forward to reverse.  You can easily access this with your thumb. The tool features 3 modes of operation located at the front of the tool.  You can set it to rotary hammer, hammer only and hammer + rotation.

As with other SDS-plus systems, you just insert the bit and it locks into place.  To remove, you pull back on the chuck and pull the bit out.

Of course, Bosch is thinking ahead and this is designed to work with the Pro+Guard dust systems.  This is compatible with the GDE18V-26D which is a HEPA job site solution.

So before we go into the performance, you might be asking yourself, why would I want this longer tool when Bosch offers a compact rotary hammer.  Well, there are three things that make up this high impact tool.

Piston – First, is the piston.  A longer piston increases the travel and therefore the speed of the striker.

Striker – Second is the Striker. Bosch uses a cutout design which creates less surface and in return causes less friction.  This also provides in the performance and acceleration.

Impact Bolt – The third is the impact bolt.  A longer bolt means higher mass, which means it’s more efficient to transfer the impact energy to the drill bit.

So how long does this last per charge?  While we will be testing it with the build-out, Bosch claims it will last up to 72 1/2″ holes 3″ deep. So I have used the corded version for a long time and I can honestly say that this is just as good as if not better than the corded version.  While I didn’t run them next to each other, I can easily tell that the cordless version has no issues of running bits into the concrete, plus it just feels faster. This is only a fraction of what we ended up drilling with a rotary hammer.  I am in the process of pouring a basement and we will need to run pipe through the walls so watch us on our social channels and see it first hand.

I was really surprised at how well the tool worked with the Pro+Guard system.  As you can see, it’s night and day difference for capturing dust and debris.

Currently, the best price I have found this at is over at Lowes for $299.  You get the tool, a 4Ah Core Battery and a charger.  I really hope this does come in a case as their older version because I like having all my SDS bits with the tool, along with some room for fasteners.  For $299, this is a great deal, at least in my eyes.

I am a huge fan of Bosch and have been using their concrete tools since the early 90s.  The Bulldog series is a top performer.  While Bosch has never let me down, I was a little apprehensive about a cordless version.  The corded version has always been tough, powerful and a true workhorse.  However, after using the cordless version, I am sold.  The GBH18V-26DK is powerful, easy to use and a workhorse.  In fact, I feel like it performs better than the corded version, which says a lot. So Basically you are losing the cord and gaining more power, so it’s a win-win. 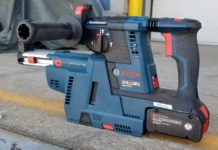