The worm drive, what can you really say about this type of saw?  The worm drive has been out for nearly a century.  It’s tried and true just like the GM 350 small block engine.  It has taken a beating over the years and is considered, not only a tough saw, but one of the most reliable saws on the market.  In fact, Skilsaw just stuck this motor in a table saw and it’s a beast.  Well now Skilsaw has taken it up a level with the introduction of the Skilsaw Outlaw metal saw.

The Skilsaw Outlaw is an 8″ metal saw that is designed to destroy anything in it’s path.  Now it doesn’t destroy it in a chaotic way, it’s more graceful and elegant.  So how can this tough saw be so elegant?  Simple, instead of an abrasive cut where the metal gets hot and almost melts, the Skilsaw Outlaw chips away at its prey and leaves a clean output, plus it is cool to the touch.  That’s right, when you get done with a cut, you don’t really need to deburr and you can grab the metal without burning your hands or fingers.  Not only did Skilsaw design this saw with the best motor known to the tool world, but they also designed it with the largest chip tray.  This means more work and less down time.  Still not enough for you?  How about one of the best blades on the market, the Diablo Cermet Blade.  Sounds like a triple play to me.

The Skilsaw Outlaw is on the heavy side weighing in at 15.4 lbs.  Not saying you can’t work with it, but if you know Worm Drives, they all tend to be on the heavier side.  The Outlaw is the only left handed saw built with a window for clean and consistent cutting.  If you are familiar with their other worm drive systems, this shouldn’t be any different. Changing the depth of cut is not only easy, but the easy to read numbers makes it perfect, even for people with bad eyesight like myself.  While some might complain about the plastic handle, I am fine with that because I feel it will hold up and I really don’t want the extra weight.  Another pro to this Skilsaw Outlaw is the blade guard thumb lever. There is a small, easy to access lever that lets the user push the blade guard back, when you start to cut material.  This way it won’t get stuck on your material and it will allow you to see exactly where the cut will go.  This is an easy to use lever as you can still use it with your left thumb while your hand is holding the top handle.

Overall if you are looking for a true and tried top rated tool, the Skilsaw Outlaw is the right pick.  While the tool is on the heavy side, in return you get one of the best motor designs and an all around tough tool that will not only last years, but possibly generations.  Learn more about the Skil Outlaw. 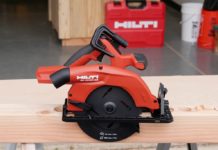