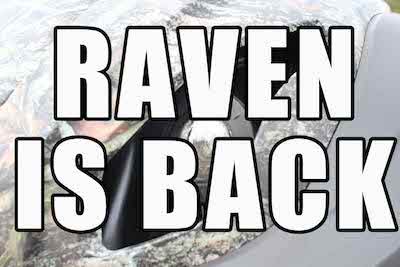 Last year the mower world was turned upside down with the arrival of the RAVEN MPV 710.  It was a first to market hybrid mower, generator and ATV.  Well it is not really an ATV but it does go 17 MPH in high gear and has ATV like styling  The MPV 710 was plagued with problems.  You can read about that here in our Raven MPV 710 Article.  An entirely new management team has taken over and they have produced the MPV-7100.  With over 200 improvements over the 710 the 7100 is an all new beast.  When we first got it, I have to admit I was very skeptical.  After meeting with the new team and seeing the 7100 my skepticism has disappeared.  We actually had 2 test units, one red and black and a camp S version which we still have.  Personally the Camo looks the best with the Real Timber skins. It is a real head turner.

Since the grass isn’t growing we have not used the mowing deck yet.  We have been using it to aerate and I must say the low-end torque is great.  Those big electric motors give the RAVEN a lot of torque.  The unit is comfortable and easy to steer.  It has a surprisingly tight turn radius. 3 pins and a connector is all it takes to remove the deck, this gives you a lot more ground clearance.  Even though the RAVEN is touted as an ATV, it’s not.  It is only 2wd and has turf tires, wherever your garden tractor can go the Raven can go.  The unit also does not articulate, meaning it is pretty rigid and not the greatest at tackling obstacles, ditches or ruts.  That being said, treat it like a garden tractor that hauls ass and you will be fine.  Second gear will get you up to roughly 17mph at the expense of torque.  If you are on a steep incline, you will need to get off the unit and change to low gear before you proceed.  Sometimes you need to rock the unit a little while changing gears to get it to lock in.

While in generator mode we were able to power our Rolair JC-10 Air compressor but not our Homelite electric log splitter which kept popping the circuit breaker.  The generator produces a maximum of 7100 starting watts.  They are not available for sale yet but when they do are we will let you know with a complete list of the final specs.  The Raven has a 3 year warranty on the unit, 2 years on the engine and 1 year on the 48V lead acid battery.  According to RAVEN you get about 40 minutes of runtime on a fully charged battery depending on the terrain and how much of a lead foot you are.  It has a small area in the back that can hold 75lbs of cargo.  I would have liked to have seen this a bit bigger so I can load mulch and rocks for my yard into it.  The RAVEN comes in red and black, camp which is the S version and an all black version is in the works.

Maintenance looks easy and everything is easily accessible on the unit. The unit started easily every time and we did not experience any issues apart from a few sputters on the first tank of gas.  Denver Global has really done a 180 and the RAVEN has a real good chance of succeeding this second time around.  Most of the parts are still made in China by RATO and are assembled in North Carolina.  I have personally met the management team and can say that their top concern is reliability. They have a few Ravens out in the field being tested right now and as soon as the dealers are in place and they feel the unit is ready, it will go on sale.  From my experience with the RAVEN, I believe it is ready.  That being said the maintenance costs are going to be higher than a conventional garden/lawn tractor just because of all the extra electronics, batteries and motors on the unit.  Long term viability is unknown and unless you are an electrical genius doing anything other than regular maintenance is out of the question.  If you want to be the coolest cat on the block get a Raven!  Being to coolest always comes at a price though.    Stay tuned for our mowing write up and we will see how it mows.

John Deere Gator 825i – All Work and Play