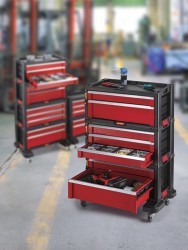 If you want a portable tool chest that is awesome, you have to check these out.  The plastic is thick and tough.  The drawers have very nice ball bearing sliders to make them easy to open and close.  Plus you can stack these in any configuration.  Not only that, you can attach very nice casters that come with the unit and make it a mobile station.  Now you know I love T-staks, but I can honesty say these blow T-Staks away.  The plastic is much thicker, the design is much better and they are great storage boxes for anyone.  You don’t have to be in the trades or looking for storage for tools.  You can use this for crafts, for kids toys and just about anything you want.  These things are incredible and I just can’t say anything more without sounding like a salesman, so I am stopping here.